I promise it is super simple!

For some reason i was always INTIMIDATED by chicken pot pie

I love chicken pot pie – anytime the mini  frozen pot pies are on sale at the grocery store I will pick a few up because they make for a quick, and filling lunch. To be honest though – I usually pick out all the chicken in the frozen ones because I am weird about frozen meals with meat.

On Fridays, which are usually my day off at my full time gig as the Creative Director for the trade association for home stagers (RESA) I like to try to make something a little more challenging for dinner – or something that I haven’t tried before. This last week I decided to finally give chicken pot pies a chance! I was shocked at how simple it was, and how delicious it was!

I was originally going to try these little mini pot pies, I realized I don’t have ANY cookie cutters (besides Mickey and Minnie shaped ones and didn’t think about using a glass until after dinner) so went with the family sized pot pie. If you are a fan of leftovers or have a family larger than 2 this would be perfect for you – otherwise I’d probably opt for the mini ones next time as they would be easier to freeze and perfect for lunches!

Okay, let’s get to what you are really here for… the recipe! 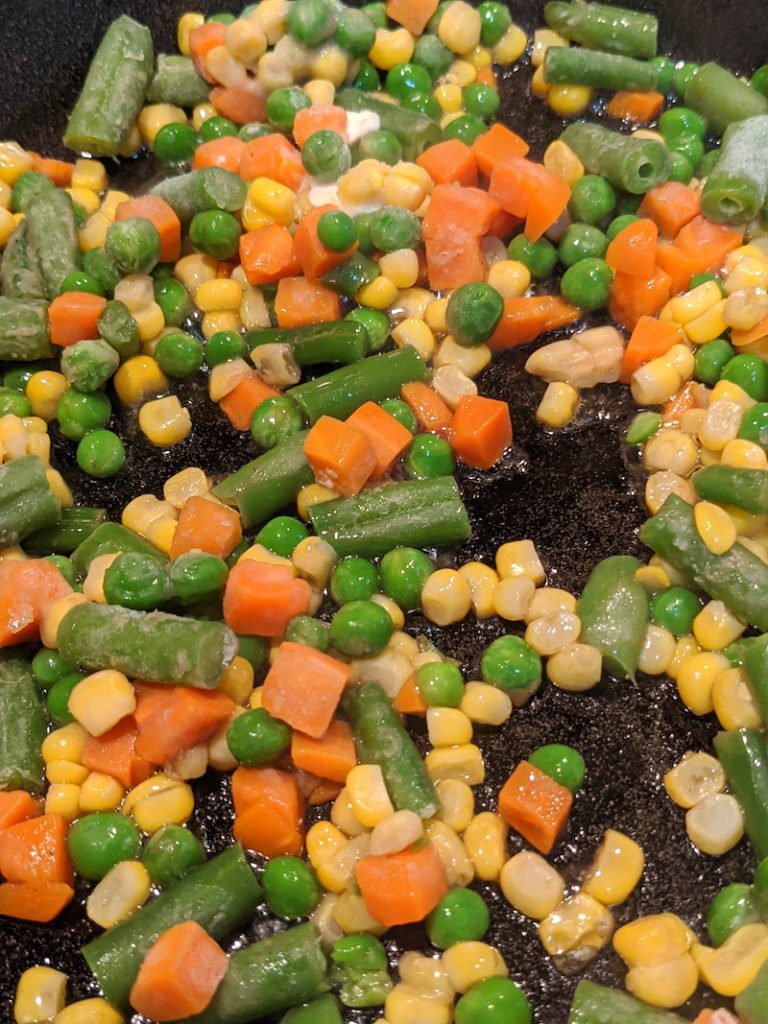 Peel and roughly chop 3 medium potatoes, boil them in water  for about 15 minutes. Pre-heat oven to 400 degrees,

Let chicken cook until cooked through (for my tenders it took about 20 minutes) and remove from heat – and cool in a small bowl.

Cook frozen veggies over medium heat in a stick of butter until they are cooked through. (I cooke for about 8 minutes) Season to your liking. Remove from pan and add to a large bowl.

Once potatoes have cooked for about 15 minutes fry them in the same pan as the veggies and brown until cooked through. 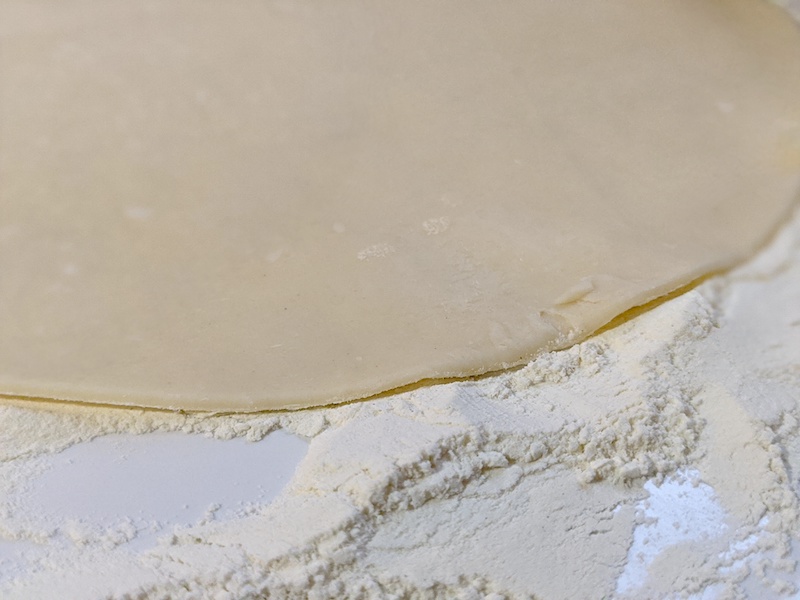 Let the pie crust bake for 8-10 minutes. Remove until you are ready to add the filling.

Season the potatoes before removing them from the pan once they are cooked through and add to the bowl with the veggies.

The chicken should be cooled down enough now to shred with your fingers (or two forks) once you finish shredding the chicken add it to the bowl with the veggies and the potatoes.

Add your skillet that you used to brown the veggies and the potatoes back to the burner on medium heat.

Add the filling from your bowl into the pan and season with Italian herbs.

Add two cans of cream of chicken soup to the filling and heat until the mixture comes together. 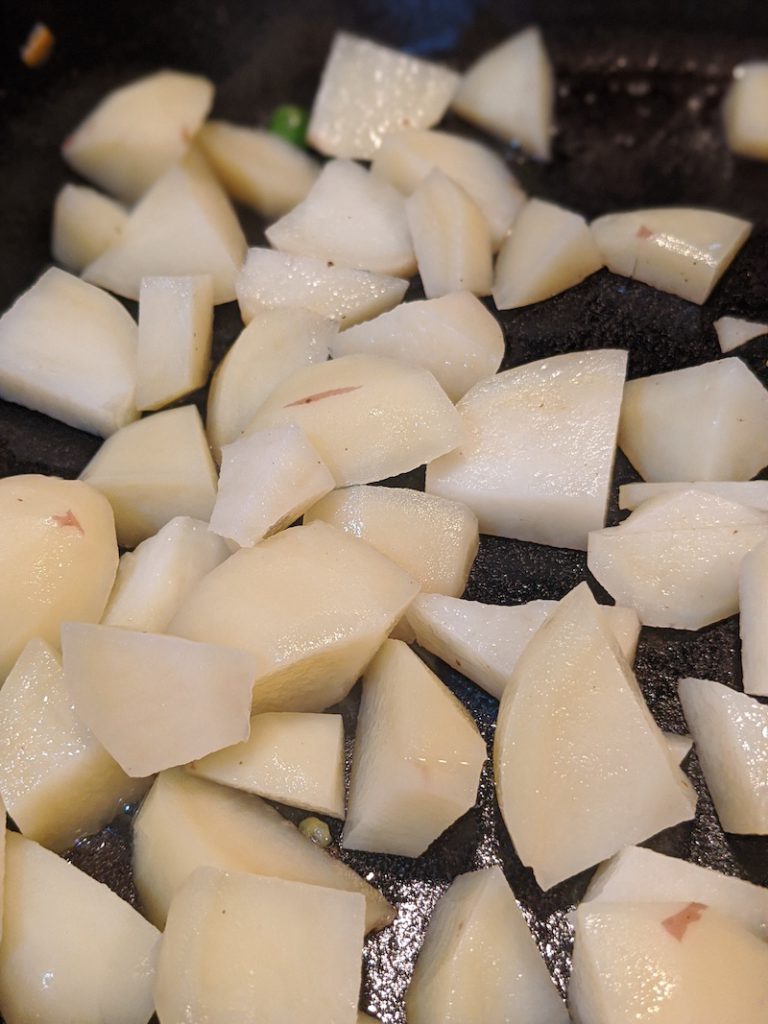 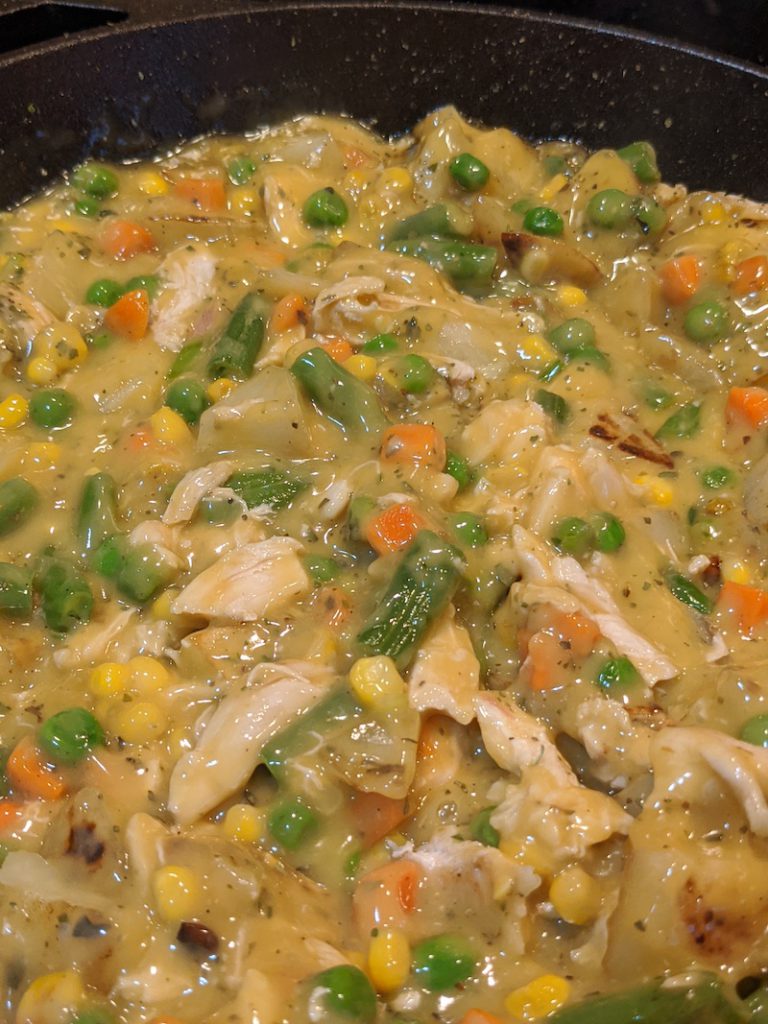 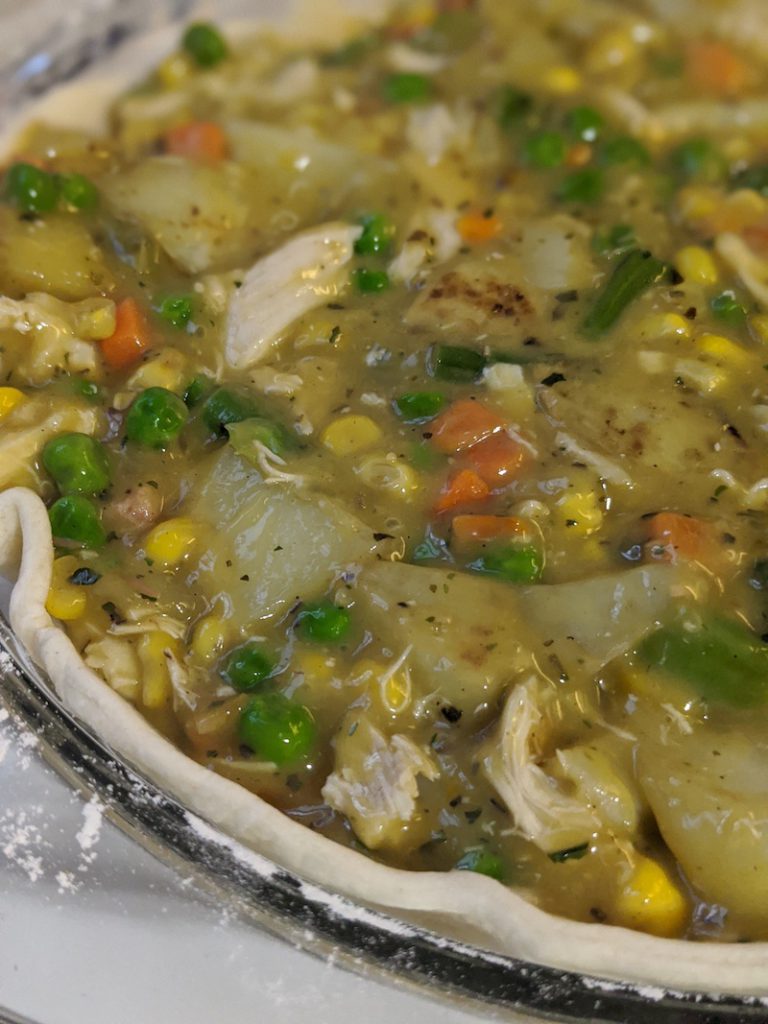 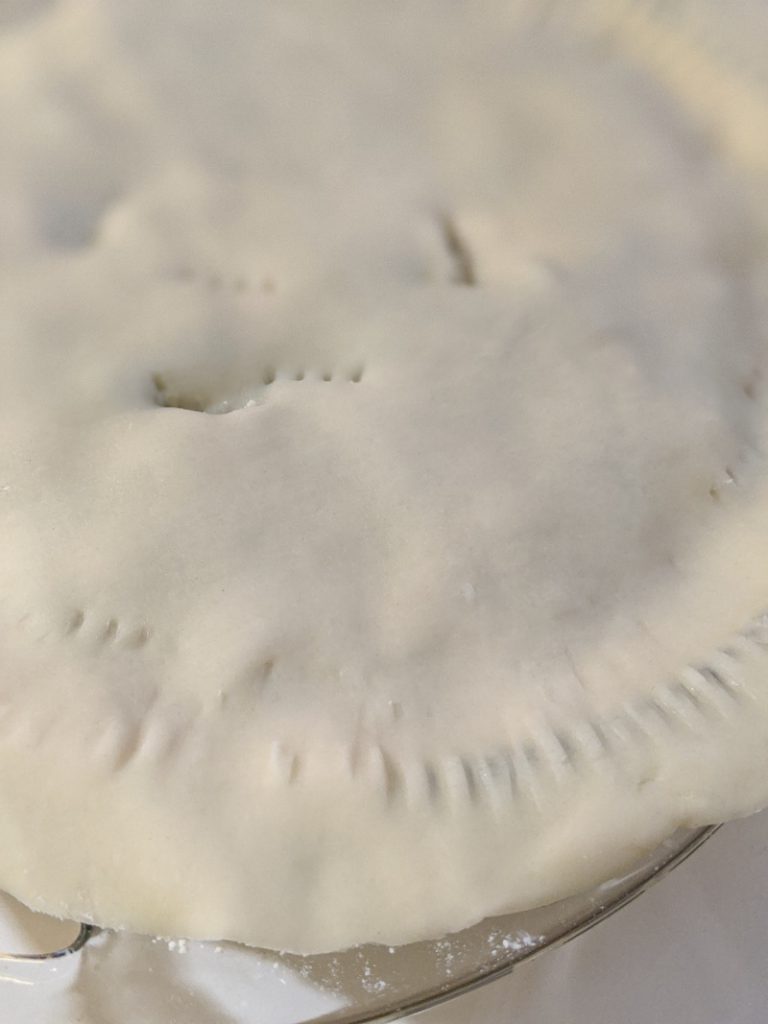 Once you are happy with the thickness of the filling add it to the baked pie crust.

Use the second pre-made pie crust and drape it on top of your pie. Take a form and make marks around the edge and add a few pokes to the center to let it breath while cooking.

Brush with an egg wash to help it get nice and brown and crispy. 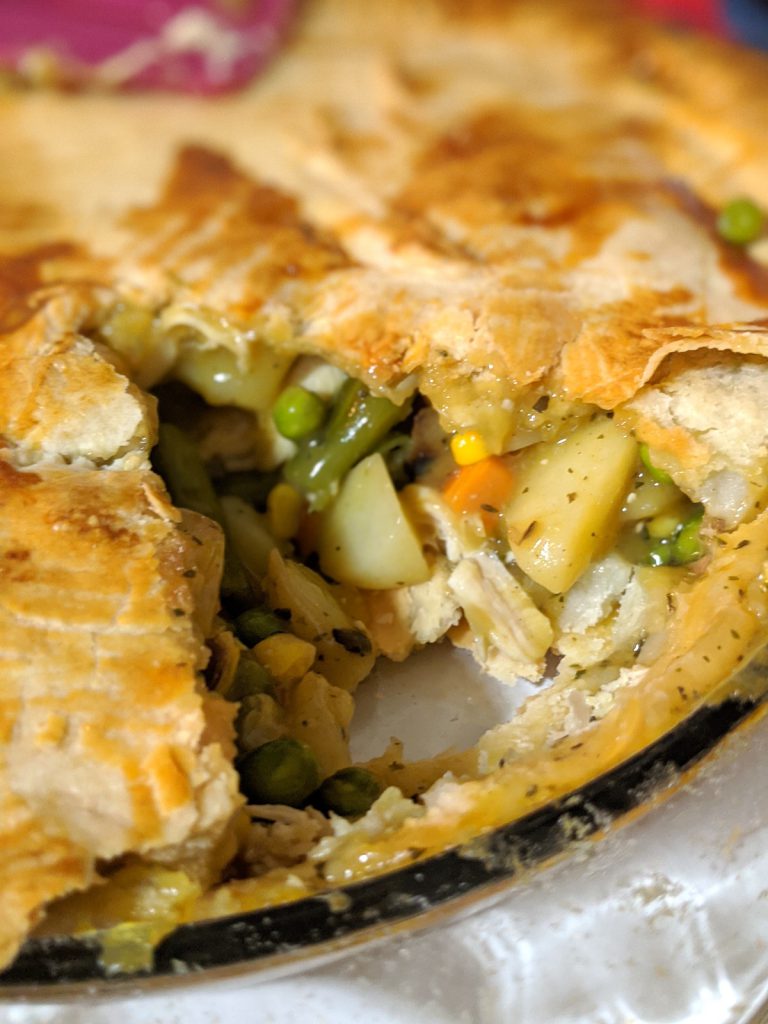 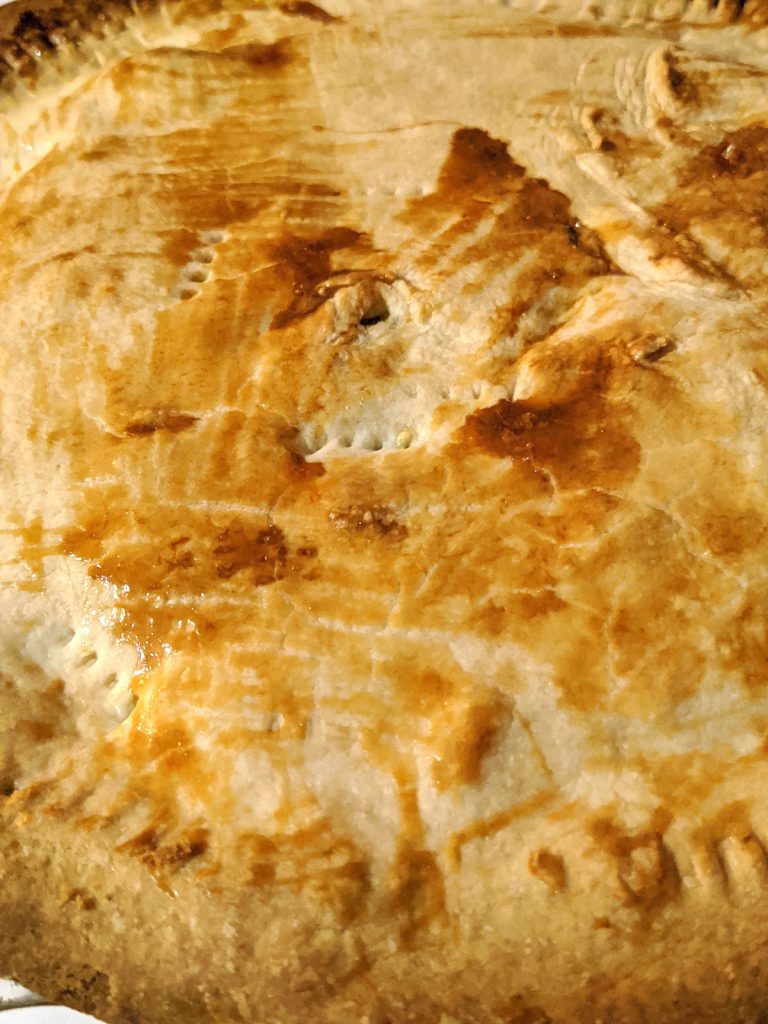 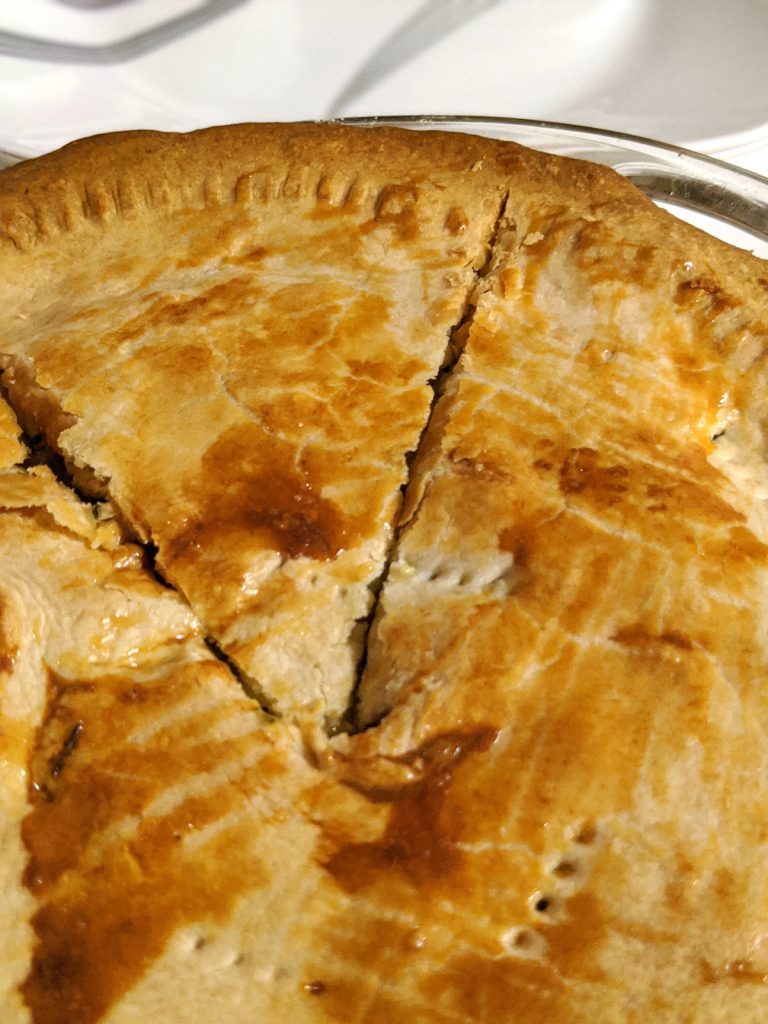 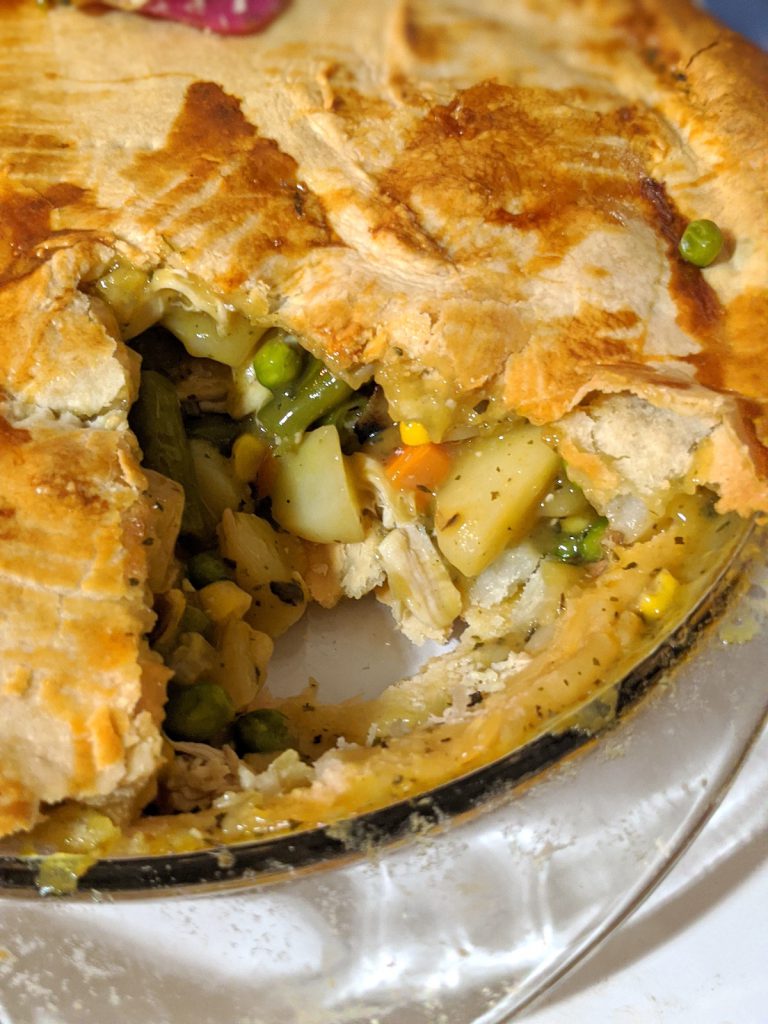 If you try this recipe let me know what you thought about it in the comments! It definitely got two thumbs up in our house… the hubby even had two servings!

Felicia Pulley is the founder of Buzz Creator. She was announced one of the top 100 Influencers in the home staging industry by the National Trade Association RESA®. Felicia has a background in marketing and an education in film and television.